Are you fretting over which vegan pumpkin pie to make for Thanksgiving??!?! Tofu based? Corn starch? Agar? Soymilk? Which one will impress the skeptical omnivorous killjoys in your extended family?? Surely there must be only one perfect pumpkin pie recipe!

I know everyone freaks out at Thanksgiving because they want everything to be perfect and this certainly includes vegans. We try to go above and beyond to challenge the unfair stereotype of gross food that so many people unfairly carry around. And our freaked-out-ness tends to manifest itself in pumpkin pie. There are so many recipes out there! Which to choose? Will people really not notice there is tofu in there? How does it compare to the old evaporated milk recipe most people are used to?

I've made several recipes over the years and I don't really remember which ones...but I do remember none of those recipes have ever been met with sad tastebuds or disappointment. I know I have made the  Vegetarian Times recipe because I have a printout in one of my cookbooks. I believe I have also made the Bryanna Clark Grogan recipe before. I know I've done a tofu-based one, and once I did a pumpkin/pecan hybrid.

But this year I decided to test 2 side by side..the two most popular (purely my conclusion of looking online) Bryanna's and the Tweaked Voluptuous Vegan recipe from Vegan Pie in the Sky.

And guess what! They both tasted almost exactly the same. The only noticeable differences were the nuances in spices. Now I did deviate from the VV/VPITS recipe a bit, so maybe it invalidated my results, but I don't ever buy maple syrup because it's so expensive..so I used agave and some maple flavor instead of the syrup called for in the recipe.

I also used store-bought graham crusts for both of the pies..cause I'm lazy about some stuff.

I also had three different brands of pumpkin and I thought the differences were interesting.


I'm going to recommend Bryanna's recipe because it's easy, cheap and pantry-friendly. You probably have everything you need in the pantry right now! As the recipe states, make it in advance! I found that when made in the morning, it was a good slicing consistency by night, but next day is ideal. 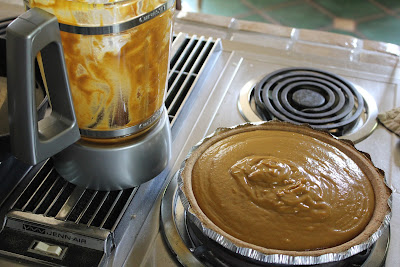 Here's the list of recipes that I chose from. I'm not trying to confuse you or overwhelm you with options, but you can see that a lot of them are very similar. It can also be helpful to read about other's experiences. But seriously, don't freak out! It will be OK!

Another tofu-based one
Tofu-based pumpkin pie #3
Tofu-based #4
This one has vegan cream cheese in it and a cute cashew border.
No-bake chocolate-pumpkin pie
Tofu #5
Gluten-free pumpkin praline pie with LOTS of ingredients
This one is interesting. It has persimmons in it.
Tofu #6 very simple
Pumpkin cheesecake from Vegan Pie in the Sky
Layered pumpkin cheesecake that uses Tofutti...
...which is an adaptation of the fatfreevegan one (not actually fat free)
Another pumpkin cheesecake...This one is so pretty!
Pumpkin pecan pie
There's even an Instructables for Bryanna's recipe.

And maybe it's overkill, but vegan overkill is the best kind of overkill. Make some pumpkin ice cream to go with your desserts this year. This easy pumpkin ice cream has been well-received at my Thanksgiving table more than once.

Posted by jacblades at 4:26 PM