I made two apple baked goods this past week. Apple rosemary scones from Vegan Brunch and a veganized apple cake from an old spiral bound cookbook.

I hate scones..I do not understand the scone. It's like a biscuit that wants to be a cookie...and ends up combining the worst aspects of both. They're hard and only a little sweet, and they're tea party fare. But tea party fare is what I needed for...a tea party. So I broke out Vegan Brunch and decided to try the most interesting flavor variation listed...apple rosemary.  I'm also going to mention I don't particularly like rosemary. 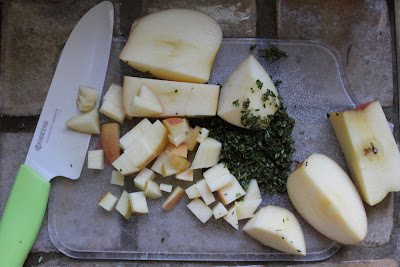 But I was still intrigued by this combination. I had some gala apples and we have endless amounts of rosemary in the yard, so this seemed like the thing to do. 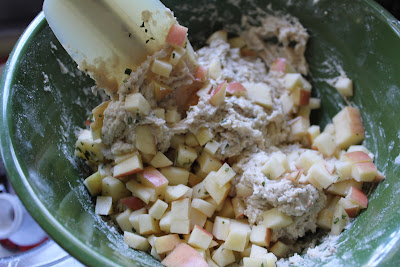 The batter was really tasty. And I loved the flavor of the apple and rosemary with cinnamon and nutmeg. 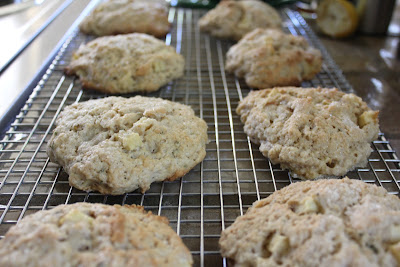 But my opinion was not changed on the finished scones. Still not for me.

But what is for me is cake! 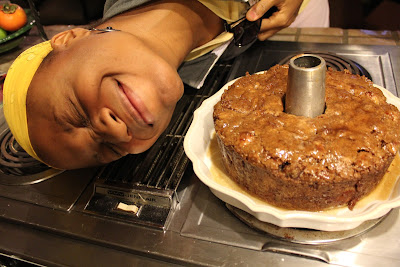 ...and for Mimi too. (She said this was her favorite of all my desserts she's had..This cake is certainly good, but somehow I think she forgot about the Kblog pumpkin cinnamon bun cake that I made last year.)

So some granny smith apples and a little veganizing later and we have a delicious fall dessert. The batter for apple cakes is interesting because you make it and think you've done something wrong because the batter will have the consistency of drop cookie dough. The large amount of chopped apple pieces added will release the moisture necessary to turn the batter into a cake and not a giant dense cookie. 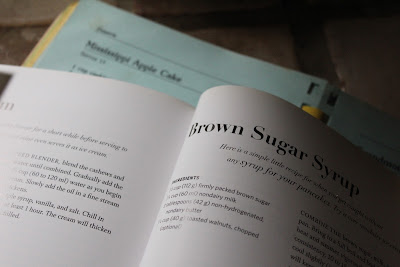 Brown Sugar Glaze
adapted from The Joy of Vegan Baking 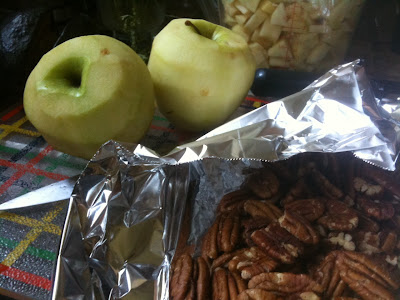 Preheat oven to 350 degrees. Grease and flour a 2-piece angel food pan (or if you must, a springform pan. A removable bottomed pan is necessary.) Combine flax meal and water in a small bowl and set aside. In a large bowl, cream the oil and sugar until well incorporated. Beat in the flax mixture and vanilla. Sift the dry ingredients and beat into the wet mixture. The dough will be stiff and cookie dough-like. Fold in apples and nuts. Press batter into pan and bake one hour or until a knife comes out mostly clean. There will be a hard crust on top of the cake. Cool.

While the cake is cooling, make the glaze.
In a small saucepan, combine brown sugar, almond milk and Earth Balance. Bring to a full boil and boil for three minutes. Reduce to a simmer and cook 10-15 minutes, stirring until thickened. Remove from heat and add vanilla. It should thicken up a little bit as it sits.

Remove the tube and cake from the outer pan and place on a cake platter. (This cake stays on the tube base so we can keep the crust on top.) Spoon glaze over the top. 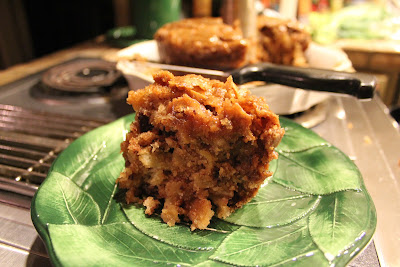 The crust on the top is phenomenal. Once the glaze soaks into it, it is amazing in indescribable ways! 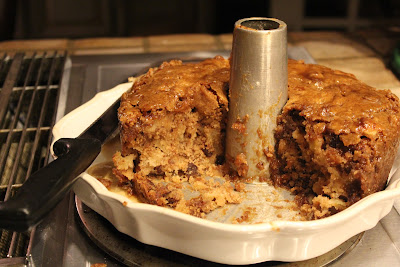 Posted by jacblades at 1:14 PM