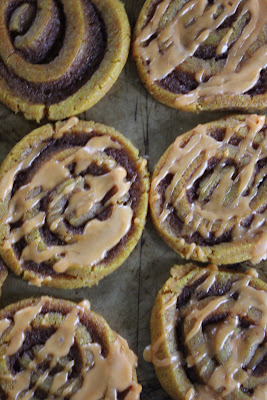 Is it bad that I get excited about going to a party just so I can bake something? I was being particularly lazy yesterday and debating between going to my neighbor's Halloween party or sitting on my ass and watching The House of the Devil on repeat for about the 8th time yesterday. As much as I adore THOTD, 8 times was a little excessive..and there would be lots of kids at the party and old people, which might make a lot of people go for a 9th viewing of THOTD, but I enjoy handing out glow sticks to the kids and watching them go batshit insane over them. (Seriously guys, hand out glow sticks for Halloween, not candy.) and I always enjoy listening to old people talk..I've always found it much more substantial than the talk of many people my age.

So what to bake? 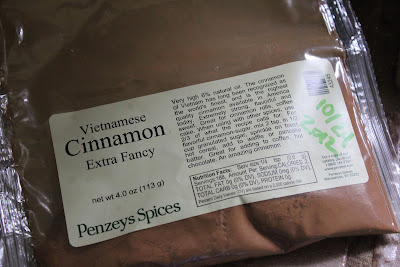 Since I just replenished my supply of THE BEST CINNAMON IN THE WORLD, I was kinda excited to bake something where cinnamon was the star. I will gab about this cinnamon for a minute because I love it so much and I think everyone should have some in their pantry. You know how Red Hots have that intense cinnamon-y flavor that's like cinnamon x 10 but without the woody bark taste? So imagine if that was a natural flavor instead of one created in a lab, minus the heat..and that's what this cinnamon tastes like. It's so intense and cinnamon-y..It's almost laughable when I compare it side by side to my 99 cent jar of cheapo cinnamon. You open the bag and you'd swear there is a batch of warm cinnamon rolls hiding somewhere in the bottom.

So cinnamon roll cookies it must be! I have been wanting to try these for a while. I believe there is a recipe in The Vegan Cookie Connoisseur, but my copy is buried deep somewhere in the basement, and well...spiders. Which kinda reminds me of one of those tongue-in-cheek e-cards I saw on Pinterest. 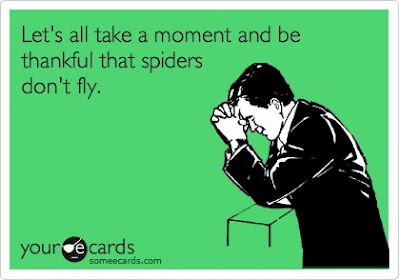 Perhaps I should have counted my blessings and foraged the depths of the basement. I will have to do it at some point. But I like my recipe a lot.

Cream the Earth Balance, sugar and molasses together. Add in vanilla, egg replacer and almond milk. Sift in the flour, soda and salt and mix till incorporated. If dough is crumbly, add almond milk by the teaspoon until it becomes manageable. Divide the dough into 2 balls and roll each out in between 2 sheets of parchment paper into a 10-12 inch square. You will probably have to trim the edges to make it square or at least rectangular. I refrigerated the dough for 30 minutes after this, but I do not think it necessary.

Mash the filling ingredients together in a bowl to form a paste and spread on each of the dough squares. (I dyed my dough orange and yellow for Halloween.) 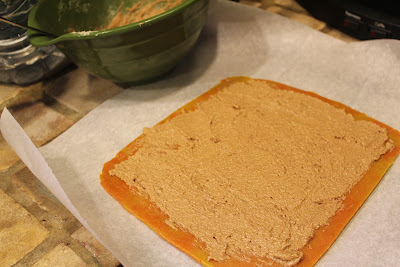 Using the parchment paper, gently roll up each square into a log and freeze at least one hour, preferably until completely frozen. I only froze the first log for an hour and it crumbled a little bit in the next step. 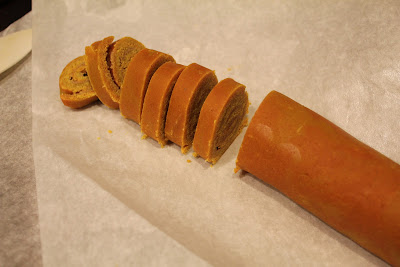 Preheat oven to 350 degrees.
Slice the logs into 1/4-1/3 inch slices. I got 15 slices from each log. The photo above is the first log that crumbled a tiny bit at the bottom when sliced because it wasn't completely frozen. I just pressed each slice back together with my hands and it was fine. 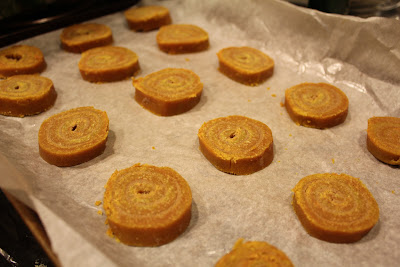 Arrange the slices on a baking sheet lined with the parchment paper and bake 8-10 minutes. They will spread out a lot and should look like this when done. They will be very soft. 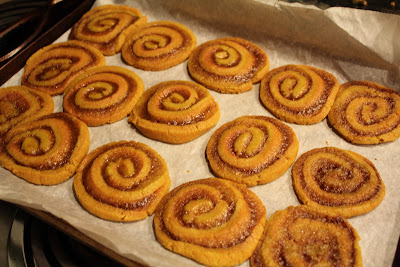 Cool on the pan for 5 minutes then carefully slide the parchment paper and cookies onto the counter or cooling rack and let the cookies continue to cool, at least 10 minutes.

Prepare the glaze by mixing a little bit of water with some powdered sugar. Start with only a few teaspoons of water and add more as needed. Mix in vanilla. I added orange food color for Halloween. (I don't ever measure my glaze ingredients, but I am guessing them to be about 1 cup of powdered sugar, one tablespoon of water and 1/4 teaspoon of vanilla.) 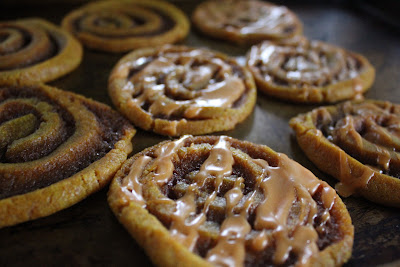 These were a big hit and I ended up trading the few leftover cookies on my platter to a vegan-curious woman for a big bowl of guacamole. (Guacamole and cookies for breakfast instead of just cookies! Yay!)

Posted by jacblades at 9:09 AM