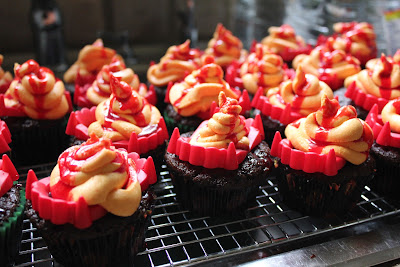 These are kinda funny. Usually I like to use spider rings if I do plastic toppers for Halloween cupcakes, but these red vampire teeth just seemed so fun.

Here are some mini cupcakes I made with the spider rings last year. I swirled chocolate buttercream with orange tinted Biscoff spread for the frosting. 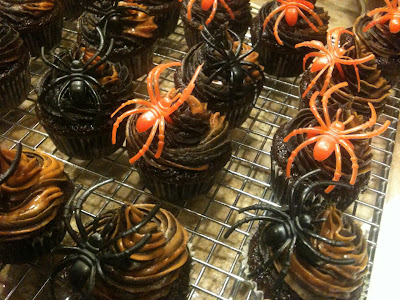 They were a big hit, but I was getting tired of doing spider rings. Originally I wanted to do chocolate buttercream, but then I realized they would look like mouth-full-of-poop cupcakes, so I went with orange buttercream. Only I didn't have any oranges or orange extract...but I did have..orange Kool-Aid!
I added a little bit with some food color to the VCTOTW buttercream recipe to get some surprisingly tangy icing. 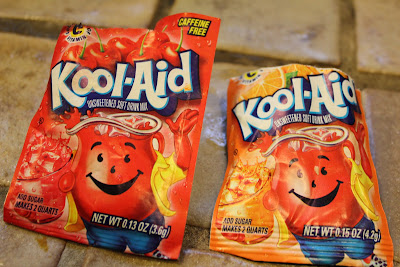 And what are vampire teeth without fake blood?? So I made some classic movie blood (corn syrup + food color) and added a pinch of cherry Kool-Aid. (A little goes a long way! Add sparingly a tiny bit at a time.) 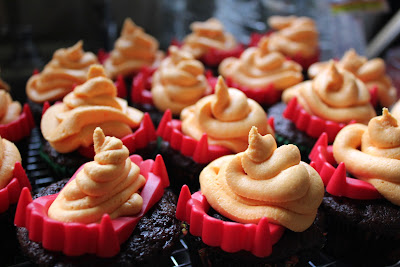 I didn't have an icing tip with a large opening so I was lazy and just snipped off the corner of a zipper bag and iced that way. The swirls are a little haphazard, but it just adds to their general weirdness. After topping with the blood, they were covered with plastic wrap for the next day. The blood soaked in a little bit, so these are probably best decorated right before being eaten to keep their cool blood effect. 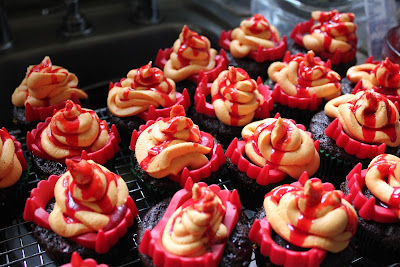 I made two batches, one using Chloe Coscarelli's chocolate beer cupcakes (Did you know Chloe's dad is Don Coscarelli, the guy who made Phantasm? If you haven't seen Phantasm, it's a great cult horror movie with a kickass theme song.)

and the other batch using the chocolate stout cupcake recipe from Vegan Cupcakes Take Over the World: 75 Dairy-Free Recipes for Cupcakes that Rule

. I actually didn't use stout at all, but some light beer that had been left from a party a few weeks back. Honestly I picked those recipes just to get rid of the beer. Chloe's recipe was lighter and very cake mix cake-like, but I slightly preferred the VCTOTW recipe. Not a huge difference between the two though. Chloe's recipe filled one cupcake pan with enough left for about 9-10 mini cupcakes. 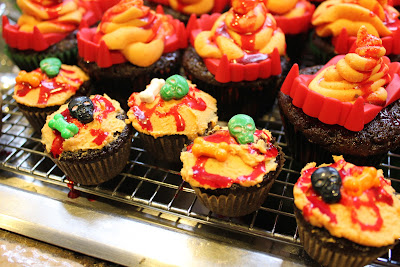 I decorated the minis with some skull and bones candies I found at the dollar store. 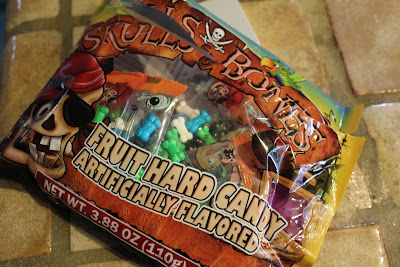 Listen to the Phantasm theme as you make these guys. It always reminds me of Halloween and scary movies. 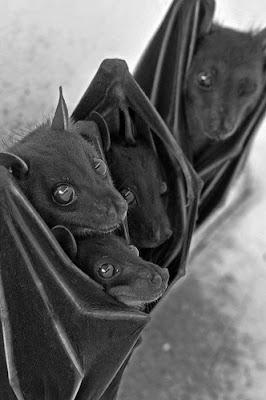 Posted by jacblades at 3:30 PM