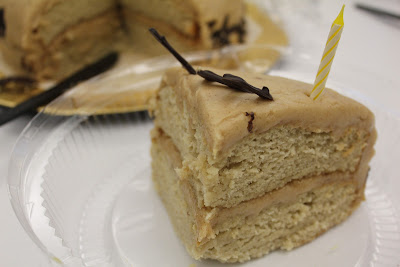 My friend hinted to me the other day that her birthday was coming up, so my scripted response was, "What kind of cake do you want?" She said she needed some ideas, so I sent her my cake page on Pinterest with about 2000 cakes and she happened to pick the one that I made for my birthday last year. Weird. But not so weird because it's a delicious cake from the tolerant vegan.

I love that the recipe calls for 3 whole cups of banana. I think that came out to about 6 large bananas for me. Any banana baked good should use a whole bunch of bananas for optimum nanna-i-ness, in my opinion. And because I'm a banana fanatic, I add a box of banana flavored pudding. (It won't taste artificial, only give a little extra oomph to the natural banana flavor. My mom scoffed at this artificial addition when I first dumped the box in, but said she could only taste fresh banana in the finished product and thought the cake was great.) Pudding mix is also cornstarch based, and cornstarch is a great egg-replacer. Not that you need it here..especially with all the banana. But it will make for a better texture. Using pudding mixes is one of my favorite easy ways to flavor cakes. Just cut down the sugar in the recipe a bit and add it with the dry ingredients. If you're like my mom and hate the idea of a processed pudding mix going into homemade food, then you can leave it out. It also tastes just fine and banana-y without it. 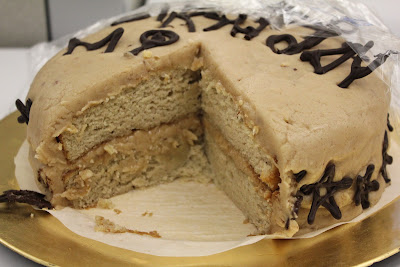 I made the cake at work a few days before because we happened to have 80000000 overripe bananas. I had always planned on using my mayo frosting, since I think it's similar to, yet better than cream cheese frosting. And then I used the last of the vanilla in the cake.. and the mayo frosting pretty much needs vanilla so you won't guess you're actually eating mayonnaise on top of a cake. The only other extract we had was almond..and we had plenty of almond butter...

And it was fabulous.

So here is my banana cake (only slightly modified from the tolerant vegan) with almond butter frosting.

Preheat oven to 350 and grease 2 8 or 9 inch cake pans. Mix all of the dry ingredients together in a bowl and set aside. I prefer pureeing my bananas, to make it less banana bread-like, so pour your almond milk into the blender and add a few bananas at a time until your blender bowl says 3 1/2 cups. I think that's actually easier than mashing and measuring out 3 cups anyway. Add the rest of the wet ingredients to the blender and puree until smooth. (I also like emulsifying the fat too.) Pour the wet mixture into the dry mixture and whisk until combined. Bake 25-35 minutes, or until toothpick comes out clean.

Now here I didn't measure out any ingredients and I came out with different textures each time I did it. Basically you want to use the regular mayo frosting recipe with the higher sugar amount, but use almond extract (but much less almond because it's so strong) instead of vanilla and add almond butter. This is what I estimate my amounts to be. If you want it stiffer, add more sugar, softer, add more Vegenaise and almond butter. See the pictures above for different consistencies.

You don't even need an electric mixer for this. It whips up smooth with just a hand whisk.

Posted by jacblades at 6:23 PM